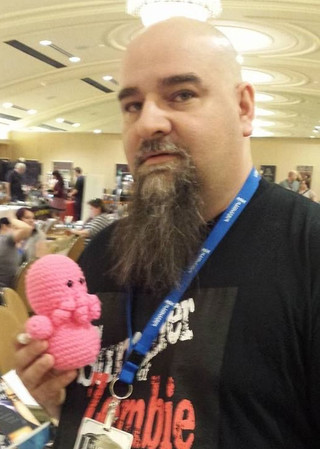 Armand Rosamilia knows quite a bit about horror writing. His work has appeared in many publications, including his story, "Creeping Death," in the Smart Rhino anthology Zippered Flesh: Tales of Body Enhancements Gone Bad! He's also written a good many novels, including his Dying Days series, Chelsea Avenue: A Supernatural Thriller, Middletown Apocalypse, Dirty Deeds, and others. We were thrilled to have a chance to talk with Armand about one of his favorite topics--horror writing.

Zombies seem to be the rage, especially with the success of The Walking Dead TV series. You've written a good deal of zombie fiction, particularly in your Dying Days books. What do you think is the appeal?

It depends on the person. Some readers love zombie fiction because it is a mirror held up to society. Some think it foreshadows our future. Some think it is an analogy for the way the world is today, and is falling apart. For me, I just think zombies are really cool. I love reading about them and, as a kid, I loved watching zombie movies. So I can see the entertainment value of them first and foremost.

You're an incredibly prolific writer. Where do the creepy, often bizarre ideas come from?

I read a lot. Always have. Dean Koontz books started me on this journey at 12. I read mostly nonfiction now and watch Discovery Channel Investigation shows. The real horror is all around us, and is easy to tap into as an author. I have so many ideas for novels and shorts I'll never get to, and it would be a large chunk of my day just to write them all down. Whenever I don't have a specific contract on my desk and I'm able to add whatever I want to my writing schedule I simply tap into my brain and see what's at the front of the ideas and if I'm excited about writing it right now.

What's your latest (or impending) release? Can you tell us about it?

I always have a few projects on the horizon. I just released Green River Blend: A Supernatural Thriller with Devil Dog Press. It is a story about coffee. Yep, coffee. A mysterious man opens a coffee shop in a small Florida town and, when the residents get addicted to his coffee, strange things begin to happen. Beta readers said it was very much Bentley Little-ish, and I agree. When I began writing the novel, I was looking for that exact feel to it.

Next up is my crime thriller Dirty Deeds. I won a Kindle Scout contract with it. Look for it the end of January. I'm excited about it because I've never strayed this far from what I normally write. The advance readers love it, so it will definitely turn into an ongoing series.

Thanks, Armand, for giving us some background on your incredible work!

(This interview was originally published in the January 2016 issue of the Smart Rhino Publications e-letter.)