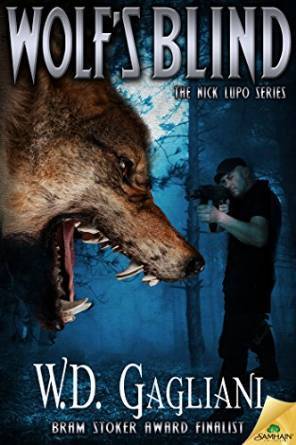 W.D. Gagliani is the author of many novels, including Savage Nights, Wolf’s Trap, Wolf’s Gambit, Wolf’s Bluff, Wolf’s Edge, and more. Wolf’s Trap was a finalist for the Bram Stoker Award in 2004. Bill has published fiction and nonfiction in numerous anthologies and publications. He is a member of the Horror Writers Association (HWA), the International Thriller Writers (ITW), and the Authors Guild. Raised in Genova, Italy, as well as Kenosha, Wisconsin, he now lives and writes in Milwaukee.

Bill, with his co-writer David Benton, wrote the story "Piper at the Gates," published in the Smart Rhino anthology Zippered Flesh 2: More Tales of Body Enhancements Gone Bad! We had fun in the following interview!

You tend to write a hybridization of horror and crime fiction/suspense. Do you find this combination easy to write, and why?

I do find it easier (no writing is truly easy, as you know). But not because there’s something magical about the mix that I’m tapping into. I find it easier because I grew up loving thrillers (and mystery and other genres, but thrillers were big), and later fell under the spell of one S. King, who blew my mind and sent it reeling into that black hole of terror I’d always been circling anyway. I had enjoyed horror before, such as James Herbert’s The Rats and The Fog, but when King came along with ‘Salem’s Lot, I truly was lost. I went all in on horror then. I took a break for my first couple years of college, then jumped back in. It became my favorite genre to read.

But, in any case, I never quite lost the thrill of the thriller. I loved the British authors the most. I admit, writers such as Ian Fleming, Alistair MacLean, Desmond Bagley, and Duncan Kyle. Although David Morrell made a huge impact with First Blood and I started discovering great American writers, too. After quite a few years concentrating on horror, I just naturally started to channel the thriller people I’d always liked so much. So, the idea that thrillers and horror aren’t necessarily mutually exclusive swirled around in my head, but subconsciously. I think in the long run I found that I couldn’t always sustain that sense of terror or dread needed in a horror novel, but if I mixed in a sense of more realistic suspense, maybe less supernatural and more grounded in what happens every day in the world (violence seems to be the true universal language, unfortunately), I was able to fill out the plots in a way that seemed more fulfilling to me. Since I came to love the so-called splatterpunks of the '80s, whose work tended to be more visceral and less supernatural, it was like blending two primary colors to create a third (secondary) color, you know? Whether or not it works, I don’t know. I have fun with it, so I hope that sense of fun translates down to the reader.

The sixth Nick Lupo novel was recently released. How did you develop a character who is a werewolf homicide detective?

I started developing the plot for my first novel Wolf’s Trap right in the middle of the vampire resurgence, and I just rebelled against it. I enjoy some vampire fare, especially people such as Kim Newman, Tamara Thorne, Karen Taylor, Nancy Kilpatrick, Tanya Huff, P.N. Elrod … but generally I tend to stay away from it unless it grabs me with some other element. I always gravitated toward the Wolf Man motif from the Universal movies, loved some books such as The Wolf’s Hour by McCammon and The Howling by Brandner.

I dunno, I liked the metaphor of the dark side, the monster within, long before I even understood it. I mean, I found it truly frightening. Then there was this syndicated TV show, Forever Knight, about a vampire who atones by becoming a cop. I don’t mean that I decide to copy that, but it was large in my head because it dealt with the everyday struggle of a guy who was a monster but a) didn’t want to be, and b) had to find ways around his needs and “desires.” I started to think, what if he was a werewolf instead of a vampire? And except for the night-time limit, everything else seemed tougher on the werewolf. So I started noodling with the idea and wondered how someone would deal with it, that condition. (Eat lots of raw meat, for instance.) Originally I used Dominic “Nick” Lupo as a working name, but over time I started to like the Dickensian approach of naming some characters, and decided to keep him Italian … and a lupo, a wolf. Why not? I think the fact that he became a cop was both testament to the fact that he had committed some crimes and wanted to atone, sure, but more so because it allowed me to bring in some of the other genres I loved, the thriller and the noir/hard-boiled mystery. And there you have it.

You're on a bus with two of your favorite writers. Who are they, and where are you headed?

This makes me ask so many questions!

Why are we on a bus? Is it only the three of us? Who am I sitting next to, and is the third one sitting in front of us, looking back, or behind us and we’re looking back? Or is he/she across the aisle? Is it night? Is it one of those Greyhound overnight routes? Is there a cramped bathroom? What happens in there, other than the expected? Is there a serial killer at the rear of the bus, working his way forward with a knife? (See “At the Back of the Blue Bus” by W.D. Gagliani and David Benton for the answer to that one.) Why aren’t we on a plane? Who are we running from? Do we have luggage? Who has the window seat? What’s that outside the glass? Why does it look different than it did before …?

What was the question again?

Oh, yeah, the other writers … I guess I’d love to talk about the genesis of steampunk (which I’ve loved since 1984) with Tim Powers and James Blaylock, who were mentored by Philip K. Dick. I could just as easily see myself talking to Phil Dick and Harlan Ellison, two other great influences of mine. But I think Powers and Blaylock would be it. They’re already friends, so I’d love to be in that circle. We’d eat bad roadside food and talk about the vagaries of the universe and wonder why we’re not reaching our destination, which for some reason we’ve forgotten… you see how this goes. It never ends!

A perpetual bus ride. Somehow that seems fitting. Thanks, Bill!

You can visit W.D.’s website and check out his latest ventures.