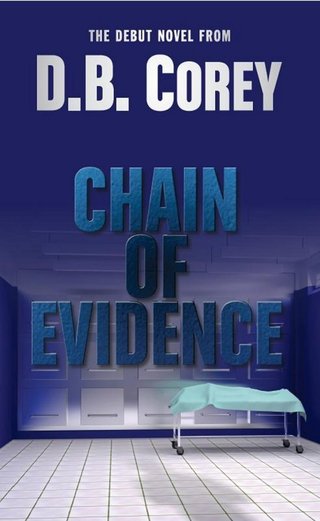 D.B. Corey’s first novel, “Chain of Evidence”, a police procedural/thriller, was published by Intrigue Publishing this past summer. In the story, Moby Truax, an aging detective who is nearing retirement, must investigate a serial killer stalking the streets of Baltimore—and Truax suspects the murders are that of a copycat killer, and that he actually faces two serial killers.

After a stint in college, Corey joined the USNR flying aircrew aboard a Navy P-3 Orion chasing down Russian subs. During his time there, he began a career in IT. He didn’t begin writing until his mid-50s, and had to pay some dues before landing his contract with Intrigue and the subsequent publication of his first novel.

I asked D.B. to talk with us about his experiences during the creation, editing, and publication of Chain of Evidence, among other things. He kindly agreed to the following interview.

Weldon Burge (WB): Your novel, Chain of Evidence, was published by a new independent publisher, Intrigue Publishing. What have you learned from that partnership?

D.B. Corey (DB): I signed with Intrigue in July of 2012. The novel was released in August of 2013. Had I not missed my first deadline, it would have come out four months earlier. So the first thing I learned was not to miss deadlines. Once the book did come out, I discovered I had a second job—marketing myself; something I was unprepared to do. I found that writing the book was the easy part, there were not enough weekends in the month, and the publisher designs the cover. He may even want to change the title, but that was OK with me. My title was terrible.

WB: The hero in your novel is Moby Truax, an aging detective nearing retirement. The villain, Harvey Morral, is a serial killer who also happens to be a medical examiner who is into necrophilia. How did you research to develop these two characters?

DB: With all respect, I consider our military men and women and our first responders to be heroes, so I would never refer to one of my fictional characters a hero. Heroes are flesh and blood people who can be hurt, so my good guy is “the protagonist.”

WB: Couldn’t agree more. Sometimes we forget who the true heroes are!
DB: I didn’t want Moby to be a super-cop—some guy who stood six-six, weighed in at two-hundred-and-fifty pounds, was solid muscle, played in the NFL, and had bullets bounce off his chest. Everybody writes those kinds of main characters and the movies are full of them. To research Truax, I only had to look at myself. I wanted him to have the same problems I found myself facing; age-related problems: diminishing faculties such as memory and eyesight, weight gain, resistance to and resentful of the changing world around him. I used those things as a starting point. As he developed, he had to deal with younger peers with entitlement expectations and a boss who regarded him as taking up space. Moby became cynical, suspicious, arrogant, condescending, and proud—lots and lots of flaws; a good main character.

Harvey Morral, on the other hand, is hateable. He is wanting in every social aspect of his life to the point he’s willing to kill to attain the women he covets. He employs a tried and true template of many literary bad guys, but to put just a bit of a spin on him, I made him a coward, who only finds strength when he hides in the shadow of a legitimate killer.

WB: Is Moby going to be a series character?

DB: God I hope so. If the novel is well received, I have the second in the series in mind. He’ll be retired, and broke, and maybe I’ll bring back Vecchio (Moby’s female foil in the book) just to drive him nuts. I think that’s as good a place to start as any.

WB: What’s been your most pleasant surprise as a debut novelist?

DB: I must admit, I am very pleased with the reception the novel has received to date. And if I may share an anecdote; my son mentioned to his neighbor that I wrote a book. She downloaded it and read it in two days; said she couldn’t put it down. She asked my son how she could get a signed copy, so he and I went to visit with a paperback. That’s when I realized how it must be for celebrities because that’s how she treated me. I felt a bit awkward in that particular role, but she was, and I’m loathed to use this term as applied to me, “star-struck.” We sat and talked in her kitchen for thirty minutes or so, I signed the book and left. Later, I read her Facebook post. I had no idea that small gesture could mean so much to someone.

DB: If I may, I’d like to do what politicians do—change the question. My least pleasant occurrence came before the book published. I corresponded with a writing friend online. We critiqued each other’s work. One day, she was especially harsh on a scene I wrote. I went back to look, and it was obvious she hadn’t read what she critiqued. I commented on her error and suggested that maybe she read too fast. She became belligerent and said that she always skipped over the things I wrote, and maybe I should just give up. That was a bit hard to take, and I actually considered her terse advice. But, the longer I thought about it, the more I was determined to prove her wrong, if only to myself.

WB: You’ve mentioned that you read “10 or 20” how-to books before tackling the novel. Which ones were the most helpful, that you’d recommend to other first-time novelists?

DB: I may have exaggerated just a tiny bit. But, of the starter books I read, I found several to be beneficial: The First Five Pages by Noah Lukeman, Hooked by Les Edgerton, Goal Motivation & Conflict by Debra Dixon, and On Writing by Stephen King. King’s book is probably the most intuitive of the lot. Those are my four favorites, the books I recommend. Of course, there are many others on query writing, synopsis writing … you get the picture. The point is, if you want to become a writer and if your name isn’t Hemingway of Twain, you might want to take a few pointers from those who have gone before you.

WB: Do you work from an outline, or just wing it?

DB: Actually, I’ve tried both. I wrote from the seat on my pants (known as a "pantser" in the trade) to begin with, but then I read Outlining Your Novel by K.M. Weiland, another how-to book. It was good and made many points, but every time I tried to outline, I found myself writing entire scenes within the outline. No self-restraint.

I met Jeffery Deaver (The Bone Collector) at a conference earlier this year. Nice guy. We had a few drinks and he told me he spends eight months writing an outline to a novel. James Patterson said in an interview that he does the same, and writes 60 to 80 pages of outline for his. To be honest, I don’t see how they do it. I have to sink my teeth into the story. I can’t do that several weeks down the road, so I employ a combination of outline and writing. I use bullets for notes I want in each scene, and then write it. Maybe not right then, but I don’t wait months either. E.L. Doctorow described novel writing as driving a car at night. You know where it starts and you know where it ends, in between, you can only see as far as your headlights. I tend to agree.

WB: You spent 12 years in the U.S. Naval Air Reserves, and flew as an aircrew on a Navy P-3 Orion submarine hunter during the Cold War. How did those experiences help you in your writing career?

DB: Well, I wasn’t aboard the P-3 the whole twelve years. They did let me out on occasion. But kidding aside, I did many cool things in the Navy, from tracking Russian subs to orbiting a pod of playful whales in the North Atlantic, and from each sea experience, came a sea story. If you ever meet a sailor in a bar, ask them. They’ll keep you enthralled for hours over a couple beers and a bowl of peanuts. I learned how to transform the mundane into the exciting, because after you’ve told the same story half a dozen times, you need a twist, if only to keep it fresh for yourself. That’s what fiction writers do, if you think about it.

WB: If you could go back in time to start your writing career all over again, what would you do differently?

DB: Absolutely nothing. I couldn’t have done this were I any younger. I didn’t have what it takes.

WB: What's next on your writing agenda?

DB: I am working on another thriller, this one with a vigilante theme. A woman is brutally murdered and the killer gets off on a technicality. The sister is not happy about it and … well, hopefully, it should be out next year.

After that, I’m going to see what I can do about disassembling the government in a YA thriller.

DB: Although I like Moriarty, I just wrote a novel with a very sick antag. Hannibal Lecter—no question.

WB: One last question, just for fun. Who is your favorite superhero, and why?

DB: I grew up with Superman, The Flash, Batman, Green Lantern, X-Men … but I’d have to flip a coin between Spidey and Iron Man—Spidey because he had true superpowers but was damaged, and Iron Man because of his technology, originally purposed just to keep him alive.

WB: Well, D.B., thanks for spending a few minutes with us!

DB: Weldon, thank you for the opportunity! I enjoyed your thought-provoking questions, as I’m sure you can tell by my rather lengthy answers.

For more on D.B. Corey, visit his Web site at www.dbcorey.com.

(A version of this review was also published in the Jan/Feb. 2014 issue of Suspense Magazine.)