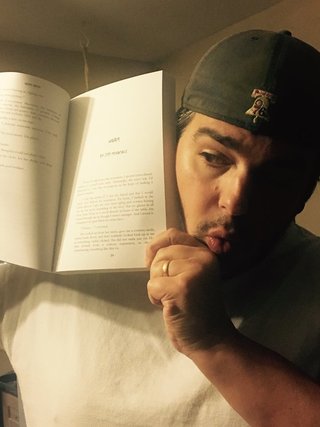 No way did I intend to write a trilogy from the start! I wrote book one and was able to land an agent with it (this was nearly 10 years ago) and he immediately asked me for a sequel, stating that pitching two books instead of the one would help land a publisher. So, I got hard at work on the sequel, completed it, gave it to my agent, and he loved it. But then of course came the inevitable: “Any chance for a third? A trilogy would be fantastic.” I think my reply was something (politely) along the lines of “No f*cking way. I killed everyone; they’re all dead.”

I soon parted with my agent (on good terms) and went the indie route, and Bad Games and Vengeful Games sold very well. I was hit with lots of letters from readers asking for a third book. So, I totally sold out and whipped up a third. Nah, I’m just kidding. I balked on the idea of a third, and the last thing I wanted to do was sell out and write a cheap imitation of the first two books. Eventually, however, an idea did come to me, and slowly but surely, book 3, Bad Games: Hellbent was born, and now, believe it or not, roughly five years later, book 4, Bad Games: Malevolent is due out late this summer. Never say never, I guess.

I work from a rough outline. I generally have an idea of what I want to happen, but more often than not, once the characters begin to develop, they take on a life of their own. At this stage, quite often the story will change from my original intentions. It’s rare that a story goes exactly as I intended. I guess you could say it’s kind of like having several routes to a destination. I’ll get there eventually, but I often change routes mid-way, if that makes any sense.

Well, apart from the standard answer I’m sure most give about always being a weird kid whose mind constantly wandered towards the dark side (and it’s assuredly true in my case) I think the thing I like about horror is the primal feeling it instills in us. It forces us to live in the now. I believe people spend so much time worrying about the past and future that no one embraces the now (and I’m certainly guilty of this too). But when you’re scared shitless, it kind of forces you to live in the now, you know? It’s exhilarating.

Do you really think the original Texas Chainsaw Massacre is the best movie ever?

Unquestionably, unequivocally. It is so raw and gritty and real. No twists, no backstory (and none asked nor welcomed) just true in your face terror. It’s freaking brilliant.

Yeesh! Tough one. I think Misery is one of the best novels I’ve ever read, so it’s hard to go against, King, but Barker is just so … I don’t know how to describe it. His mind—there’s no scale to describe his brilliance. His way with words. I’ve often said that many writers have a style that is imitate able if you read them enough. I don’t think anyone can imitate Barker. He’s one of those writers that makes you both elated and jealous. Elated because you just read a particular passage that was brilliant, and then jealous because you know you’ll never write anything that good LOL.

And, with Side Effects, you've now started a mystery series with the FBI agent Maggie Allen character. Is this a natural progression from your horror writing? What do you see as different about the two genres?

I’m always trying to branch out into different genres, and I love serial killer/police procedural thrillers. Red Dragon by Thomas Harris is another all-time favorite of mine. So, I wanted to give the genre a shot. I am extremely proud of Side Effects and think it’s one of the better things I’ve written, however reception to it has been mixed. Stephen King once said a writer is often the worst judge of his work, and maybe he’s right in this case LOL. Still, I like the book quite a lot, and I really like the characters Maggie and Morris. I think with some editorial tweaking of book 1, there’s a solid series ready to take off someday.

What has been you're greatest challenge as a freelance writer?

Technology! I am exceptionally stunted in the tech department. I still have a flip phone! If it was up to me, I would just write all day and let someone else handle all the tech/marketing stuff. But alas, I cannot, and it can be, as you say, a challenge.

That’s a tough question. I think it’s human nature to always wish we did something “different” in the past. But I believe we grow just as much, if not more so, from our mistakes and failures. Obviously, there are little things along the way I wish I could have done differently, but that’s life, isn’t it? How else do you learn?

Your short story “Worm” is included in the Smart Rhino Publications anthology Zippered Flesh 3. What do you find most satisfying about writing short fiction?

The lack of pressure to know that when the story is finished it’s finished. When embarking on a novel, you know you need a certain amount of words in order to reach novel territory, but with a short story, the tale can be told in as little as a few pages. I mentioned Misery earlier as one of my favorite novels. King stated that he meant the tale to be a novella, not a novel, but as he got going, the story ventured into that “is it a novel or is it novella?” length, and I suspect (though I could be a zillion percent wrong) it’s why he inserted the Misery novel Paul Sheldon was writing while being held captive by Annie Wilkes into the entire novel itself. Otherwise it would have been too short.

Huh. I guess the best thing to suggest, other than writing good stuff, is to develop a decent following via social media and a mailing list. A mailing list is very valuable. Also, I cannot stress enough the importance of good editing and a professional-looking book cover. Do not skimp on these! They are worth every penny.

When it comes to writing, what’s on your bucket list?

Not sure. Gathering with a bunch of my peers I respect for cocktails and laughs? Seeing my work on the big screen? Tough to say at this stage in my career.

Imagine you’re lost in the Canadian wilderness, fully dependent on your self-preservation skills. You’ve managed to start a fire. If you could have two other writers hovering around your campfire, who would they be?

You said Canadian wilderness. Their health care is better than ours. So, I wouldn’t worry. Seriously though, I’d probably want Hemingway to bring the booze and the party atmosphere, and then maybe Poe. He’d love Hemingway’s booze, and getting inside his head would be an experience unlike any other, I think.

One last question, just for fun, knowing you’re a fan of the Three Stooges. Moe, Larry, Curly, Shemp, or Joe? And why? (And no fair saying you like them all!)

Larry. He was a Philly boy, but also one of the greatest reactive actors ever. Next time you watch an episode, watch Larry’s face during a scene that doesn’t involve him directly. He’s always in the moment. Next, in order of favs, would be: Moe, Curly, and Shemp. F*ck Joe. Couldn’t stand him.

I wasn’t a fan of Joe either. Too much of a wimp and never funny.

You can learn more about Jeff and his work at his website, www.jeffmenapace.com. Read his story, "Worm," in ZIPPERED FLESH 3.

(This interview was originally published in the July/August 2017 issue of Suspense Magazine.)