The Multi-talented Aaron J. French Discusses Writing, Editing, and His Love for Anthologies 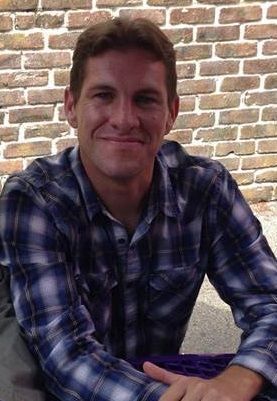 Aaron J. French is one busy guy! Besides being a prolific writer, he is an accomplished editor and has pulled together some of the best horror and weird fiction anthologies now available. His story, "Whirling Machine Man," appeared in the Smart Rhino anthology, Zippered Flesh. His latest novella, The Dream Beings, is a hard-boiled Lovecraftian tale involving a serial killer and an investigator who is pulled into cosmic horrors.

Aaron agreed to answer some questions for us--and we hope you'll learn something from his vast experience!

Aaron, you and I have similar backgrounds: writer, editor, anthologist. Let’s start with your own fiction. Your collection of stories, Aberrations of Reality, has been described as a “modern grimoire of mystical horror,” and you’ve also written a zombie collection, Up From Fresh Soil. Your The Dream Beings is an incredibly creepy serial killer/occult novel. Plus you’ve written a number of novellas. How do you manage to juggle your time to write your own work, considering your many other obligations? Do you have a defined routine?

Thanks. Yes, it’s a lot of work, there’s really no getting around that. But it’s work I love to do, so that makes it worth it. I used to have a steady routine of writing 1000 words a day, and I did that for many years. But at this point, I’m basically just working all the time, whether writing, editing, and working academically (still writing). So I basically just do as much as I can on all fronts, but focus on whichever one has the nearest deadline (ha). But whenever I have a break, I try to write a new short story, or at least revise one that I have already written. It’s a way of keeping myself working on my own fiction, given everything else I do. And yet, I will say that more and more—as you mentioned with AoR and The Dream Beings—I have been using my own personal experiences and my research into science, religion, and magic to inform my stories. Yes, life is weird. So, while I still write to entertain (as it were) or for a certain market, lately I have been formulating more of a specific agenda with what I want to do with my fiction. You can see this most explicitly with Aberrations. I feel almost like a scientist, and I am doing experiments with my work to see what I can tease out of it. Ultimately, I want to explore how horror and science fiction affect states of consciousness.

You’re a book editor for JournalStone Publishing and the Editor-in-Chief for Dark Discoveries magazine. What advice would you offer horror and other fiction writers looking to publish their work? What are the common “mistakes” you see in the submissions that come across your editor’s desk?

My advice is probably what people get all the time but might be the last thing they want to hear. It’s certainly the most trying aspect in my case. But that advice is: Never give up. Sadly, it’s quite a process to get yourself up to the level where your writing is unique and profitable. It just takes time and endurance. And that means there will be a lot of disappointments and rejections along the way, but you've got to just keep at it. If you do, you’ll start getting somewhere.

The other thing I would say is don’t do any cop-outs. What I mean is, don’t try to write a certain thing for a certain market because something in that particular market is currently popular. I hate that. I’m much more interested in what you as an individual have to say as a person, what joys and fears you can draw on from your own life that are unique to you. How can you twist and mutate your personal biography into something new, strange, and different? I think originality always gets you farther in the long run than mimesis. But of course there is always a stage of mimesis at the beginning. Moving beyond that is when things really pick up.

I’m impressed with the number of anthologies you’ve edited (The Gods of H.P. Lovecraft, The Shadow of the Unknown, Songs of the Satyrs, just to name a few). And you’re also a frequent writer for anthos—including the story, “Whirling Machine Man,” in Smart Rhino’s Zippered Flesh. What do you find the most rewarding when working on an anthology project?

I love anthologies. I almost love making them more than reading them. In high school, I was the kid who had all the cassette tapes and knew all the music scene stuff, and I would make excellent mix tapes and just give them to my friends. Even then, I was more interested in seeing their reaction to the tapes than anything else. That still comes out in the anthologies I edit. I love to put strange things together. Hopefully it works out.

Going back to the anthology The Gods of H.P. Lovecraft, you’re a noted Lovecraftian. Why do you think Lovecraft has such an appeal today?

Ha, loaded question. I could think of a lot of varying answers to that question, some which paint HPL and those who read him in a very negative light, but also some which paint them in a very positive light. Perhaps that’s part of the appeal—the controversy around HPL, especially now. But really that’s never what it’s been about for me.

I was drawn to HPL for the same reason I was drawn to Machen, Blackwood, Hodgson, and later PKD and Thomas Ligotti—and that’s the confrontation with the unknown, the supersensible, the larger-than-human dimension of the cosmos. Well, and all the occult underpinnings that go along with that. I also happen to think that much of the world feels disillusioned, disenchanted, and powerless, and so the Mythos of HPL totally resonate with that. I mean come on, has anyone been able to account for why HPL has become so popular in contemporary culture? I don’t think anyone can satisfactorily answer that—I mean, why him and not one of his other homies—but I suspect is has something to do with the state of the world. Something very big seems to be on the horizon—and, if I may, I believe that it might be cosmic aliens after all.

Thanks so much, Aaron!