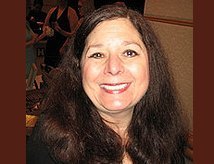 Here’s Tom’s take on Myra the medium and her lack of style—just before he lets loose and shows her how a séance ought to be conducted!

“Drat the woman—she ain’t got a bit of style.” I shook my head. If Myra had any smarts, she’d a waited till the séance got bouncin along and then got the spirits to move her tables and lamps and whatnot. ’Course she wanted to prove they was present and manifestin—since, thanks to Houdini, hardly anybody believes in séances—so she had to go and make it look as if everything was just as ordinary as a copy of the Hartford Courant.

Anyhow, in tandem with the séance scene, Huck’s misunderstanding of their plight and his subsequent pluck (or perhaps, mental aberration for a cat so terrified of haunts) demonstrated by screaming at the ghosts they are so stupid they don’t know enough to go into the light also made me giddy.I also experienced a great deal of amusement writing the scenes when Cal and Al, the trumped up no-account "professors" at the community college, seduce the wicked Lily Blum, and whenever the resident "werewolfs" (as Tom and Huck call them) Ted and Earle show up in the novel. Additionally, Tom’s asides and explanations about the demonic nature of vacuum cleaners, Lizzie Borden’s murders, Internet dating, and the nature of witchcraft were a hell of a lot of fun.

All in all, I have to say I never had more enjoyment writing any book I’ve written. Of course, the book has many uneasy supernatural moments, along with quite a bit of poignancy—it’s not a one-note book. It was important for me to incorporate every element that goes into writing a novel—depth of character, resonance, a broad range of moods, and atmosphere depending on the plot demands as the book moves toward its climax and conclusion. In that sense, it’s also a serious work—and not merely an homage to Twain’s humor.

What advice would you offer a young writer concerning working with an editor?

My first job out of school was as the assistant to one of the executive editors at New York Magazine … one day she sent me off to interview Mikhail Barishnikov for a piece for the Intelligencer. I came back to work and wrote it in what I thought was my best facsimile of the “Intelligencer Style,” and she told me it was excellent and proceeded to (very quickly and very rapidly—because she was brilliant) edit it. I was amazed at how much better it was. I remember saying to her, “Elizabeth, this is incredible. You turned it into something extraordinary.” She shrugged and told me, “No you wrote it … but remember, every writer—no matter who she or he is—needs an editor.” I never forgot those words—not just because she was a friend and my mentor—but because they were true. If you’re not ready to hear them, you’re not a pro. Simple as that.

Every writer needs an editor. Make it your credo and you’ll find your sales improve dramatically—not because you’re kowtowing to someone else’s wishes, but because you’re open to how your work can be improved. That’s the key—it’s about finding out which scenes work and which don’t. Where your book lags, where your story is overwritten, where a character needs to be sharpened, made more important or eliminated. Good fiction demands these kinds of changes—always be ready to make your book or story the best it can be, even when you know in your heart you’ve written your best. Someone else’s input can be invaluable—not just on that particular piece, but because you begin to incorporate that advice in subsequent work automatically and your writing will improve by leaps and bounds over time.

Always be willing to improve your storytelling skills—in the long run, you’ll be able to take more chances with your work and hit your stride.

[This interview was first published in the May 2015 issue of the Smart Rhino Publications newsletter. Smart Rhino published her novella, THE BOX JUMPER, shortly after this was published.]

For more on Lisa Mannetti, and the many books she's written, visit her website at http://www.lisamannetti.com/.

THE NEW ADVENTURES OF TOM SAWYER AND HUCK FINN is available on Amazon in both adult and young adult (YA) editions.

You can also find her latest book, THE BOX JUMPER, on Amazon as well.