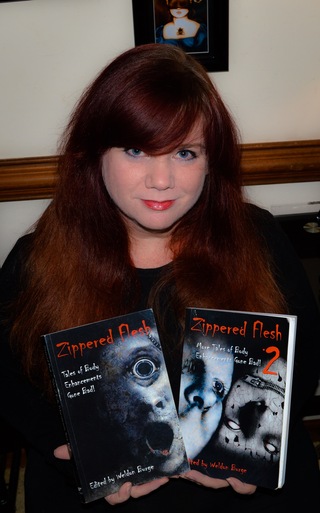 UPDATE: Jezzy's story, "Small Claws, Small Guns," will appear in the upcoming anthology Asinine Assassins. You can support the book during our crowdfunding campaign at Asinine Assassins Kickstarter.

Jezzy Wolfe is an author of dark fiction, with a predilection for absurdity. A lifelong native of Virginia Beach, Jezzy lives with her family and quite a few ferrets. Her poems and stories have appeared in such ezines and magazines as The World of Myth, The Odd Mind, Twisted Tongue, Support the Little Guy, and Morpheus Tales. She has also been published in various anthologies, such as Graveside Tales’ Harvest Hill, The Best of the World of Myth: Vol. II, Library of the Dead’s Baconology, Western Legends' Unnatural Tales of the Jackalope--and, of course, several Smart Rhino anthos. We love her style!

Jezzy was a founding member of Choate Road.com and at one time cohosted the blogtalk radio shows “The Funky Werepig” and “Pairanormal.” In addition to her brand of humor and horror fiction, she maintains both a blog and storefront for ferret owners and lovers, known as FuzzyFriskyFierce. Visit Jezzy on her author’s blog at jezzywolfe.wordpress.com, on her ferret blog at FuzzyFriskyFierce.wordpress.com.

Jezzy was more than happy to spend a few minutes to talk with us. Enjoy!

Horror challenges me. I gravitate to it, like a delicious, freshly brewed pot of coffee. Horror gets your pulse racing (also like a delicious, freshly brewed pot of coffee). It reminds you to be grateful for being alive ... and for not being one of the unlucky schmucks you're reading about. I am personally fascinated by what is not known and not seen--things mysterious and sometimes beyond comprehension. Supernatural tropes really grab my attention. Slashers freak me out as well, simply because they are often in very plausible scenarios. But I do not feel it is an easy fit for me, as I'm the dork who goes to the theater and laughs at the jump scares, and makes silly comments. It's knee-jerk. Maybe it's a response to fear (although you will find that I'm not the bastion of wit and humor when I'm walking through a haunted house attraction). So when I can manage to produce a story that is legitimately creepy and unsettling, I am a bit surprised. As well as giddy. In that way, I do find horror more rewarding, because it is against my nature, and therefore more an act of discipline.

Your humor always impressed me as snarky. Well, maybe not snarky—unique and dark. Do you consciously incorporate humor into your writing? Or does it happen naturally?

I have to fight to NOT be a smart-ass when I'm writing. And that's almost precisely what it is. I'm that way off screen as well, constantly making wisecracks. There are things I've written where I gave myself permission to be as ridiculous as I wanted, and those particular projects are more comedy than horror. Perhaps something akin to really enthusiastic bizarro, even. But if I want to produce something that really chills the reader, it's a challenge to keep a straight face. It's natural for me to write for laughs, and more of an exercise in restraint if I'm writing for screams.

Do you think writing blogs has impacted your other writing? If so, how?

Absolutely. I'd never considered seriously pursuing writing until after I had blogged for a few years. I used to do all my blogging on Xanga, which was a blogging network that successfully merged blogs with social networking. Users interacted a lot more on sites like Xanga. It wasn't about a thumbs up or shares. It didn't even have private messaging when I first started blogging ... that came around later. Users gravitated to groups that represented their interests, and communicated directly with those group members, not by status commentary, but by actually visiting those user pages, reading the posts, and commenting on those posts. And Xanga was well populated with poets and writers, some of whom were actually published and in print. I enjoyed those interactions, and they helped me find my voice. Over time, I went from silly commentary to poetry to short fiction. That was where I found myself as a writer.

I've never found that blogs such as Wordpress embraced the best of blogging. Yes, you get broader traffic and visibility. But the interaction is not there. Wordpress is not so much a communal experience, not like old school Xanga, or even Livejournal. That social interaction helped me immensely. But that's just me.

Which authors have most influenced your writing?

I really started getting into horror as a teenager, reading Christopher Pike (known for novels such as Slumber Party and Chain Letter) and Richie Tankersley Cusick (author of goodies such as The Mall, Silent Stalker, and Someone at the Door). I still have all those books, in fact. They've all been read so many times, the bindings are worn out.

As an adult, one of my very favorite voices is Barbara Michaels (better known as popular mystery author Elizabeth Peters, who has sadly passed on). I have every title she produced under that name. Her books had a distinct formula that I was quite fond of, and they were always incredible entertaining. Locked, secret attic rooms full of a history kept hidden under five (or 50) years of dust? Sign me up for that! Egyptology, Greek mythology, and twisted bloodlines discussed over scones and clotted cream? Mmmm, yes please.

I'm also a huge fan of Nicci French, which is a pen name for a man and woman team that writes psychological thrillers. I love the language and atmosphere of French novels, and I'm convinced that bad brain chemistry is every bit as terrifying as what others perceive as horror. What's scarier than the brain's inability to distinguish facts from fiction? After the year we've all had, I think we can agree that nothing is more terrifying than bat-shit lunacy.

Hell yeah! Ferrets are my people! I mean, if ferrets ever could be people. Those frenetic little furbeasts must be my totem spirits. I find them as inspiring as they are entertaining. Don't get me wrong, I like a good cat or dog. They're cool. But ferrets? Everything about them is a celebration. They relish just being alive. Many live unexpectedly short lives due to unavoidable diseases, others meet tragic fates as a result of their dogged determination and curiosity. Still, let them out of their cage, and it's like someone handed them the winning lottery ticket. They jump, they chatter, they play with you. They are jubilant, engaging, endearing. All in a tiny, slinky package with big eyes, long whiskers, and a helluva lot of 'tude.

I could use a cup of coffee now. How about it?

I usually have a cup of java in my hand as if it's glued there. Maybe something a bit more lubricating ... like a great bourbon?

Thanks, Jezzy. Looking forward to working with you again soon!