Stand-Up and Comics and Horror, Oh My: Meet Jasper Bark 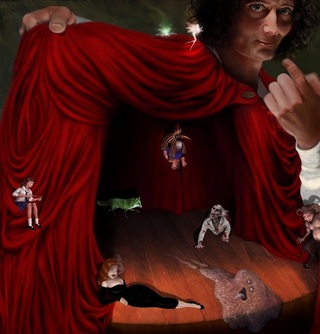 Jasper Bark has a problem staying out of trouble. Much to our entertainment, he's embraced this lifelong ambition to find trouble and use it as the content for his writing. His broad experience has given us incredible horror stories, comics, and even a children's "pop-up" book of Leonardo da Vinci's inventions. There's not much the man can't do, creatively speaking. Plus, he has a distinct, if somewhat warped, sense of humor. Interviewing him proved to be an adventure.

Let's start by dispelling a rumor. Do you really write in the nude?

Only when I'm trying to summon a Batrachian Daemon to spitball story ideas. But that has its drawbacks because those daemons are pretty possessive when it comes to their ideas, and there's nothing worse than being taken to court for plagiarism in a hell dimension. I mean, jeez, their legal system, talk about Kafkaesque.

Plus, as I'm constantly explaining to my wife, and the Mailman, technically it's not nudity if I'm dripping in Yak's blood.

You once performed (and maybe you still do) stand-up poetry. How did that happen? And did stand-up comedy have anything to do with it?

Did comedy have anything to do with it? I guess that would depend on how drunk my audiences were.

I have worked as both a stand-up and a performance poet over the years. Stand-up gigs pay much better than poetry gigs. At one point I combined the two, so I could cover twice the number of venues with the same set. Hence stand-up poetry.

I began stand-up when I was 15 years old. There weren't any comedy clubs in the North of England where I lived, which was very blue-collar. In those days, the comedy clubs were all down in the south of the UK, which was much richer. So, I played Working Men's Clubs, which had cheap beer and blue comedians. I used to skip school and hitchhike to the venues. Technically I was way too young to be in any of those places, but they let me in for some reason. I think it was because I looked about 12, had a potty mouth, and the customers found it hilarious.

I left school at 16, which you could do in the UK back in the '80s, and, having no qualifications and no other trade, I led a hand-to-mouth/gig-to-gig existence as a stand-up and actor throughout my late teens and twenties, eventually making quite a few 'blink and you'll miss me' appearances on TV. It was the closest I could get to running away to join the circus.

Horror is also an extremely stimulating and exciting genre, it gets the heart racing in the same way that a piece of really good erotica might. Think how much your heart races watching a slasher movie, and how much it races the first time you take someone to bed. There's always been a subconscious link between Thanatos (the death drive) and Eros. That's why, with the right person, horror films are surprisingly good date movies.

Your novel The Final Cut is about two filmmakers who are forced to watch a snuff film. The plot is a mix of crime, horror, and urban fantasy. I'm curious. How did you research this one?