I was particularly interested in learning more about Mitsuo Fuchida, the commander of the Japanese attack force on Pearl Harbor. He orchestrated the bombing and strafing of the ships in the harbor, killing thousands of military personnel and civilians. He was also the one who uttered the famous "Tora Tora Tora" ("Tiger Tiger Tiger"), the code phrase indicating the surprise attack had been successful. After Pearl Harbor, he personally led air attacks against American and other allied bases throughout the Pacific.

Most people don't know that, shortly after the war, Fuchida converted to Christianity and became an evangelist, touring the United States and parts of Asia, spreading the Gospel for the remainder of his life. He came to love America and even obtained a resident card—although he never became a citizen. My understanding is that he felt he didn't deserve to be a citizen. I found it fascinating that Fuchida, who despised America during the war and, with a samurai mentality, was bent on revenge, found forgiveness in the United States and came to love its people.

One reason I was so interested in Mitsuo Fuchida is that I own a signed copy of his book, From Pearl Harbor to Golgotha, published in 1953. Beneath his name is a Bible verse written in Japanese. The reference is to Luke 23:34—"Forgive them Father, for they know not what they do." 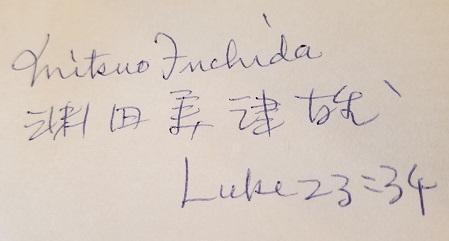 Think about that for a minute.

I have long thought about Fuchida's inscription in the book. During our visit to the Arizona Memorial, we witnessed Japanese visitors bowing in reverence before the lists of names of those young men still entombed beneath the memorial. And it then occurred to me: Our enemies of today are often our friends of tomorrow. We hold no animosity toward the Japanese, nor do they toward us. What happened at Pearl Harbor was a sad, painful moment in our past—for both nations. Mitsuo Fuchida certainly came to understand this.

Perhaps, 30 or 40 years from now, our current enemies in the Middle East will be visiting the Twin Tower Memorial, reflecting in quiet reverence on the past and of the many lives that ended there, much like our Japanese friends who now visit the U.S.S. Arizona Memorial.