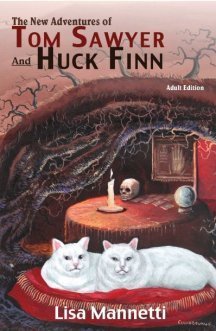 Lisa Mannetti’s debut novel, The Gentling Box, garnered a Bram Stoker Award, and she was nominated in 2010 both for her novella “Dissolution” and a short story, “1925: A Fall River Halloween.” She has also authored The New Adventures of Tom Sawyer and Huck Finn; Deathwatch, a compilation of novellas—including the story “Dissolution”; a macabre gag book, 51 Fiendish Ways to Leave Your Lover; two nonfiction books; and numerous articles and short stories in newspapers, magazines, and anthologies. Her story “Everybody Wins” was produced as a short film by director Paul Leyden, starring Malin Ackerman and released under the title “Bye-Bye Sally”.

As an editor, I’ve worked with Lisa several times over the past year or so. She kindly agreed to the following interview.

Weldon Burge (WB): Your debut novel, The Gentling Box, won the Bram Stoker Award for Best First Novel in 2008. That’s like strapping on a jetpack and blasting off into a writing career. How has the award helped your career?

Lisa Mannetti (LM): Winning was the single most gratifying event of my life. Years earlier, when I began writing horror, I placed second in a contest at one of the World Horror conventions and when the publisher mentioned my story would probably “garner a lot of interest for a Stoker recommendation,” I practically passed out in front of the mailbox onto my front lawn. So winning such a prestigious award was beyond my wildest dreams. I always try to write my best, but I thought of the Stoker as a true pinnacle that might be always beyond my reach—so it wasn’t on my mind at all during the writing. My goal was getting the book published. Winning for The Gentling Box actually meant even more because two major agents could not sell it to any of the houses in New York. When it received acclaim, it signaled to me that my belief in the novel wasn’t misplaced after all. That’s really huge.

In terms of my day-to-day career, it’s helped smooth the way for subsequent books and projects, a new agent, and the publication of my work in general. In the old days, I’d write a story and sit down with lists of places that seemed like a “fit” with the piece, then start making the manuscript rounds. Now I’m asked to contribute to magazines and anthologies, so my stories are essentially sold before I write them. I’ve never felt like the prescribed theme was any kind of creative impediment--most editors have given me tons of latitude. Those invitations to contribute have been terrific. One of my stories, “1925: A Fall River Halloween” which features Lizzie Borden as a character, was nominated for the Stoker in 2010.

It’s also helped in subtler, but no less important ways, and a few examples come to mind. I’m now an active member of the Horror Writers Association (a long-term goal I finally met) and a new edition of the book will be coming out from Nightscape Press (I couldn’t be more delighted!). Most of all, it makes me very conscious when I sit down to write that it’s critical—imperative—to set high standards and (whether the result can be deemed successful or not) to strive to produce the very best work I can—or die trying.

WB: Much of your work might be considered historical horror. Do you enjoy doing the research required for these books?

LM: Oh my God, don’t get me started!  Read More

What a fascinating interview. I especially enjoyed finding out about her historical research (and her mother's medical book!), the short story featuring Lizzie Borden, and her new Houdini idea.