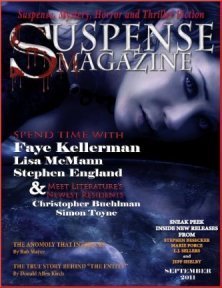 When you think of counterterrorism political thrillers, perhaps Tom Clancy, Brad Thor, and Brad Meltzer come to mind. Soon, you may be adding Stephen England to that venerable list. His new novel, Pandora’s Grave, the debut novel of his Shadow Warriors series, is an action-filled espionage/military thriller sure to impress many readers and rightfully garner him many fans. (Read my review!) And, at the age of 21, he has many years of writing ahead of him!

I asked Stephen to talk with us about his experiences during the creation, editing, and self-publication of Pandora’s Grave, among other things. He kindly agreed to the following interview.

Stephen England (SE): Not really. I learned so many things about my characters through the course of the novel—I’m afraid it would have been a very boring book if I had attempted to lock them away at the start. To give an example—about half-way through Pandora’s Grave I realized that the character of Bernard Kranemeyer, the Director of the Clandestine Service, was really little more than another faceless bureaucrat. A major problem considering the major role he plays in the story. But then it occurred to me one day—what if? What if he was a retired Delta Force operative, an amputee who had lost his leg in an IED attack? It was quite literally as though someone had turned a light on for me—it’s those type of revelations that make writing so rewarding for me—those moments when you turn a corner and something fits so perfectly—I can’t imagine Kranemeyer any other way now. That’s who he is.