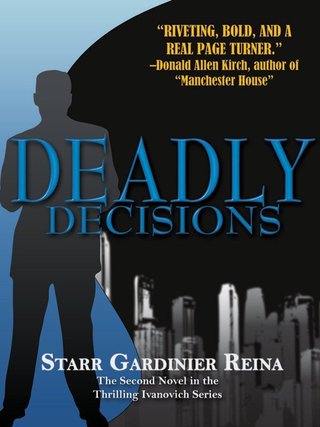 Besides being an accomplished author of suspense novels and thriller stories (mostly dealing with crime, with a sly mix of humor), Starr Reina is also an Executive Editor for Suspense Magazine. She is a member of Sisters in Crime, the Los Angeles Chapter and nationally. Starr has won three ‘Best Speaker’ awards as well as ‘Best Evaluator’ at the Voice Ambassadors chapter of Toastmasters. She was a co-chair and main coordinator for the West Coast Author Premiere, a weekend long event. She is represented by the Cliffhanger Literary Agency.

Reina has appeared in a blaze and made her mark on the literary world with her Ivanovich series. The first is In the Name of Revenge and the second, Deadly Decisions. A third in the series is being penned as you read this. Reina is also the author of the young adult novella Cruel Whispers and its sequel novel Cruel Past.

Despite Starr’s busy schedule, she was happy to grant me the following interview. Enjoy!

Weldon Burge (WB): What do you find the most challenging as Executive Editor for Suspense Magazine? The most rewarding?

Starr Reina (SR): The most challenging I would have to say is poorly edited stories before they're submitted to us. I don't mean the paltry punctuation errors, but blatant misspelled words, misappropriate usages, and terrible formatting. The most rewarding? Well, I'd have to say everything else. I'm able to read the reviews, interviews, articles and stories first! The #1 reward is being part of such a fabulous magazine with a great team.


WB: You not only cohosted Suspense Radio Live with John Raab, but you were interviewed. What did you learn from these experiences?

SR: Both experiences were a lot of fun. I was able to speak with some great authors. I learned many things from various persons, such as how they write (style), their marketing endeavors, and much more. During my interviews, I was able to share some of the same information and it was a good feeling. Not to mention how my training from being in Toastmasters really helped.

SR: Anyone who knows me can answer this question. Coffee, most definitely—but I do enjoy the occasional hot tea (or iced) and hot cocoa in front of a roaring fire in the winter in Big Bear.


WB: In your novels, In the Name of Revenge and Deadly Decisions, the first two books in your Ivanovich series, we have Pavel Ivanovich, a Russian heavy, and Italian mobster Carlo Mancini. How did you research to develop these two characters?
Read More