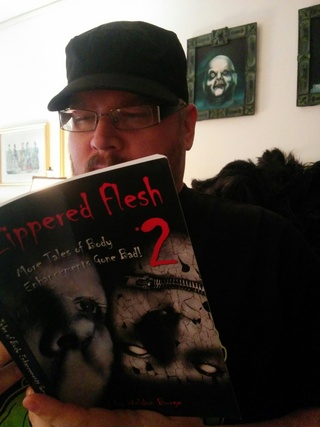 Shaun Meeks was born and raised in Toronto, and still lives there with his partner, Mina LaFleur. Shaun was formerly a semi-pro skateboarder. Now he enjoys sharing his nightmares in his writing--and scaring the hell out of his readers! His short stories have been published in many magazines and anthologies, including Smart Rhino's ZIPPERED FLESH 2, SOMEONE WICKED, and INSIDIOUS ASSASSINS. He is also the author of the books SHUTDOWN, THE GATE AT LAKE DRIVE, and DOWN ON THE FARM.

Thanks, Shaun, for hanging out with us for a few minutes!

I’ve been writing a lot more monster stories as of late, and part of that has to do with this new series I’ve started, "Dillon the Monster Dick;" THE GATE AT LAKE DRIVE is the first book in the series.

What makes a good monster? Really depends on what you’re going for. Making one scary--the stuff of nightmares--is just fun. To do that, I usually think of what frightens people. Deep-sea life, spiders, demons, the dark--these are things I’ll splice into a monster so that, on a deep level, the elements strike a chord of fear within the reader. I love the idea of monsters with slimy tentacles, coarse hairs, a multitude of eyes, and a nest of sharp, deformed teeth. The trick is making the reader imagine what it’d feel like to be face to face with the monster. The idea of feeling the repulsive skin touching your own, the overwhelming odor of rot that lingers on the thing's flesh. That's what I want readers to be thinking as they read.

But what about the monsters that truly hate or can't change what they are, the ones that you pity? I enjoy playing with that theme--the monster that is hunted and feared, yet proves to be the character with which the readers relate. The humans who shun or hunt the creature prove to be the real monsters. Having a reader relate to the monster isn’t always easy, but it’s great when it works!  Read More