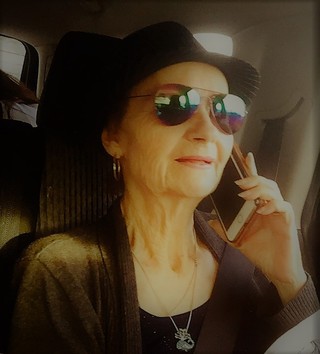 We were all greatly saddened to hear that Billie Sue Mosiman has passed. She was always supportive of so many of us in the writing community, and her work was enjoyed by readers around the world. Billie was an incredible woman, a wonderful friend, a powerful creative force, and a champion for female horror writers everywhere. This interview was originally published in the November/December 2018 issue of Suspense Magazine, shortly after her death. It's unfortunate that she never had the chance to read it in print.

Billie's Night Cruise was nominated for the Edgar Award and her novel Widow was nominated for the Bram Stoker Award for Superior Novel. She was a prolific writer—although largely suspense/thriller novelist, she often wrote horror short stories. Billie had also been a columnist, reviewer, and writing instructor. I'm glad I had the opportunity to interview her before she passed … and hope you find the following inspiring.

You've been writing professional since the early '80s—more than 60 books and probably more short stories than I can count. What persuaded you to write in the first place?

I was always a reader and went through a lot of books as a youngster. Then one day a man in a suit came to my grandmother's house. He looked so grand I sat around listening in the living room while they spoke. I discovered he was a Dean of a University and I knew you had to be educated to do that. I was smitten by an intellectual. I thought, yes, that is what I want to be. Just like this man.

My family had never gone to college, but, at thirteen, I knew I would. And it would be grand. Of course, I wanted to go to learn how to be a better writer. I had faith and determination. I went to my little blue diary and wrote in it: When I grow up, I want to be a writer.

What authors inspired or influenced your style?

I loved Steinbeck, F. Scott Fitzgerald, Jim Thompson, Bradbury, and a raft of others. It was a few years of reading before I came upon genre books and loved them too, reading each author's entire works.

Your work often bridges the gap between suspense and horror. A prime example, I think, is your novel Night Cruising, an Edgar Award Nominee. How much of this wedding of horror and suspense is intentional, and how much is simply "I write what I enjoy reading"?

The books are organic in the way they turn out. My work was always graphic and I didn't think I owed anyone anything. I was free to write the novels as they came to me. So sometimes they were called horror, but were unlike straight horror.

Your novel Widow was also nominated for a Bram Stoker Award. The story involves a female serial killer and a male copycat murderer, and apparently you did a lot of research for the book. You even interviewed exotic dancers. Likewise, your novel Wireman was based on true crimes in the Houston area back in the late '70s. How much research is required for your fiction? How do you go about it?

You've also been an editor, most notably of the anthology Frightmare—Women Write Horror, which also garnered a nomination for a Bram Stoker Award. You've always been a champion for female writers, especially those in the horror and suspense genres. What led you to start this particular project?

I saw so many anthologies on the market in horror and it always appeared to have a predominance of male writers. I have nothing against them as some are the best in the world. But where were the female writers? I knew for certain there were great women writers being ignored. I decided I'd do something for them. I'd pull together an anthology that gave them a voice. I think I was angry. I never backed down from a fight and I thought it was past time for a fight. The women came through and I was so proud. I did not add my own work. It was for them.

As an editor, what do you look for in a story? What gets you to "yes"?

If it excites me and if it catches me in the first three paragraphs. I don't like info dumps or overly wrought work or stories with no point. I'm kind of exacting about those things.

Your novel Moon Lake involves a lake monster, but the focus is on the teenage lead characters. Is this the closest you've come to a YA novel? If so, was this meant to attract a younger audience?

It was meant as an adult read, but I see how it would appeal to a teen. I'm part kid myself so I'm not surprised I end up with novels meant for a younger reader.

You've also written a memoir of sorts, Alabama Girl: Memoir of a Writer—Part 1. What motivated you to write your own story? Is there or will there be a "Part 2"?

My mother was such a towering personality in my upbringing and a disruption to the family. I had her and my dad living in my large home when they aged, but each day was like I was twelve again and my mother was the queen in my life. I don't know if I have the heart to write the second part of that book. My son, our only child at the time, died in a house fire. Other terrible things all living creatures confront happened and I just didn't think I could face writing about it. So it may never happen.

Do you think about marketing at all when you're in the "creative mode"?

Nope. I never had to do that and I can't start now. I just write stories.

From your perspective, how has publishing changed over the years? Where do you think it's headed?

Publishing has lost its way. The Amazon digital phenomenon started it. Anyone who wanted to write a book did. Those who hadn't read enough. Those who hungered for fame before they knew the rules of grammar. And so forth. We all know what happened. People got used to free digital copies. Why should they pay? Publishers, in some instances, did a rights' grab from authors then overpriced the market. The film and TV scripts have overtaken the reading of books. I weep for the whole scene and hope one day things return to normal. Normal being more than three major publishers, higher advances, more promotion, sharing digital rights with authors, and so forth.

We are not tradesmen. We don't make art except with words. From our minds to yours we share worlds. It's an honorary endeavor and as serious as can be. That's what I learned from the great authors who came before me. The world needs stories and novels. People need them. They may not know it, but I do. Since the caveman wrote on cave walls, we should have known now important a life of letters can be.

Looking back, what would you have done differently? In short, what advice would you offer a young writer following in your footsteps?

I doubt I'd done anything differently except maybe slowed down publishers who pushed me for the next book. My advice to young writers is to be true to yourself. If you like mystery writing and someone pushes horror onto you, balk, back-peddle, do anything you can to stick with what you love. Read tons of books, of all kinds. Write like a mad person. Trust your gut. And never, never give away your Life of Copyright. If someone wants to give you a million bucks for it to one of your books, trust you can get $1.2 million from some other publisher who won't steal your copyright. Besides being productive, you must be smart.

Being lost in the story and nothing else exists. Thinking how others feel when they read my words.

We miss you, Billie.