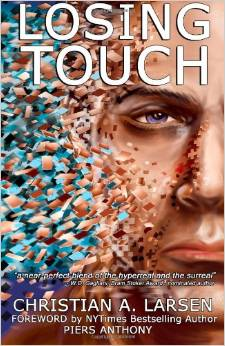 Chris Larsen’s first novel, Losing Touch, has garnered much praise and acclaim since it was published by Post Mortem Press last year, winning several awards and receiving rave reviews. The horror/sci-fi novel focuses on a typical beleaguered husband/father, Morgan Dunsmore, who is not only watching his life dissolve around him, but is also losing physical tangibility. Being able to “phase” through solid matter sounds like a superhuman ability, but for Morgan it proves to be more horrific than heroic.

Chris has also written numerous short stories for anthologies and other publications. I had the pleasure of working with him on his story “The Little Things” for the Zippered Flesh 2 anthology. I recently managed to catch up with Chris and used the opportunity to talk with him about his book, his writing, and his future.

Weldon Burge (WB): Your novel, Losing Touch, won the Preditors & Editors Award for “Best Horror Novel” of 2013. The book has been well-received just about everywhere. Not bad for a debut novel! To what do you attribute your success?

Chris Larsen (CL): I was talking to my wife, Maureen, about this the other day. I really don’t feel like I’ve accomplished much, but if you would have told me five years ago that I would have a novel published with a foreword by Piers Anthony—and won an award for it to boot—I’d have told you that you were shitting me. I think what I mean by that is that “success” is a relative term, kind of like “old” or “rich.” It’s not the sales or the accolades that make me feel successful—it’s the positive comments and reviews. When I know that I’ve reached a reader, that’s success, and it’s measured one reader at a time.

I really couldn’t tell you how I achieved that success, though. I just wrote a novel that I wanted to read. Or I tried to, anyway. There were times (many times) that I finished writing for the day and I thought that what I put on paper (read: “the screen”) was absolute crap. But a writer writes. You just keep pushing forward until people starting reading and liking what you’ve written. And it took me a while. I mean, I started “writing” when I was 10, finished my first novel at 27 (don’t look for it on Amazon—it’s safely locked in a trunk where it will stay, forever and always), and published a couple of dozen short stories before I even took a crack at novel writing.

WB: What does your family think of all this?