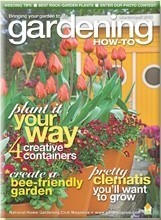 You may be wondering why this blog is called "Bullets and Butterflies." Simple, really. While my fiction tends to be on the dark side, primarily horror and suspense (bullets), I also write a good deal of nonfiction, particularly on the subject of gardening (butterflies). Although I focus more on fiction writing in this blog, I will often discuss garden writing as well.

I've enjoyed writing for Gardening How-To for many years now, and fully appreciate Amy Sitze and her editorial staff. My latest article, "Unusual Salad Greens," is in the current issue. "Fresh garden salad means much more than just lettuce or spinach these days. Why limit yourself, especially when less-familiar greens such as claytonia, orach, corn salad, and cress are so easy to grow in your home garden?" I also described other greens such as purslane, mustard greens, arugula, upland cress, watercress, endive, escarole, and a few others. The graphics staff at Gardening How-To provided excellent photos to illustrate the article content. Bravo!

When I write articles like this, my intent is to teach gardeners to experiment with different varieties, different techniques, and new strategies to improve their gardening experience. I especially love to teach folks how to grow crops they generally can't find at the local produce market.

On the Experimental Fringe of Horror Fiction: An Interview With Michael Bailey

Michael Bailey is the author of the nonlinear horror novel, Palindrome Hannah, which contains five interrelated tales as well as a secret sixth story that plays out backward through the other stories. The entire book is structurally a palindrome. The novel’s sequel, Phoenix Rose, is also experimental horror. Michael is also the author of the short story and poetry collection, Scales and Petals, and is working on his third novel, Psychotropic Dragon.

His first foray into editing is an anthology of psychological horror, Pellucid Lunacy, which was just recently released. The anthology is a collection of 20 bizarre stories, from authors with unique styles and imagination. All profits from the anthology are being given to charity—it truly is a labor of love!

I asked Michael to talk with us about his experiences during the creation, editing, and publication of Pellucid Lunacy, among other things. He kindly agreed to the following interview.

Weldon Burge (WB): Before we talk about Pellucid Lunacy, I want to ask you about your other books, specifically why you went the self-publishing route. Editorial and artistic control? Or more than that?

Michael Bailey (MB): Few publishers are interested in new authors. With experimental horror fiction, there are even fewer. Palindrome Hannah is a nonlinear meta-novel. When first sending it to publishers (agents wouldn’t touch it), I received a dozen personalized letters and enough form rejections to bind a book that would probably sell. They all said the same thing: dark, ambitious, risky. Publishers weren’t interested in artsy; they wanted cookie-cutter moneymakers. Experimental rarely sells. After polishing the novel for four years, I decided to put it out there myself to see what would happen. It sold close to 1500 copies by word of mouth and was a finalist for the 2006 Independent Publisher Awards—rave reviews, the works. It was then that I realized I would never submit to cookie-cutter and would forever push my love for nonlinearity, which of course spawned Phoenix Rose, an even stranger novel (listed for the 2010 National Best Book Awards), and my short story collection, Scales and Petals. I now have a new imprint I call Written Backwards. For me, it’s more than editorial control, although that has a lot to do with it. I simply want to publish what no one else will publish, fiction that disregards conventionality.

WB: What then possessed you to pull together, edit, and publish a horror anthology?

I remember reading this wonderful interview in Suspense Magazine. It's awesome that something of yours was accepted, definitely since Michael seems to have pretty high standards. I'm really interested in the book, definitely that 6th book in the end. I LOVE experimental stuff. It's so exciting!

Thanks, Tiffany! I really love this anthology, and would love it even if my story was not included. Michael has more in the works--keep an eye out for what's yet to come!