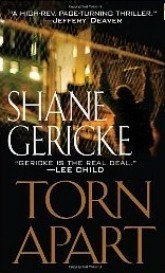 I just signed on with Suspense Magazine to write book reviews. (My first review is scheduled for the December issue--yay!) It just makes sense that I also post reviews here on my blog. Why not? To keep within the loose theme here, I'd like to discuss certain aspects of each book from a writer's viewpoint--what works, what doesn't, teaching points, etc. If you find the reviews helpful, please let me know.

To get the ball rolling, let me start with Shane Gericke's fine suspense novel, Torn Apart. This is his third thriller in the Emily Thompson/Martin Benedetti series. If you're looking for cops against ruthless killers, you can't beat this for action and suspense!

Detective Emily Thompson receives body parts from a serial killer called Hacksaw, who threatens to kill her at any moment. And then there is a police officer who, forced to raise $4 million for a medical procedure to save his deathly ill daughter, is driven to a desperate act. That Gericke can pull these seemingly disparate plot lines into a gripping, satisfying conclusion is impressive.

I particularly liked Chapter 21, the confrontation scene between a lone police officer and the four zodiac killers on a bridge, minutes after they've dumped the body of the girl in the river below. At first, the cop thinks they are just guys fixing a flat, but something doesn't smell right to him as he talks with them. As he walks back to his patrol car, all hell breaks loose.

I read the chapter several times, just to dissect how Gericke had choreographed the scene. This chapter could easily be used to demonstrate how to structure an action sequence via pacing, changing POV, dialogue, and vivid description. I don't think the chapter could have been written any better.

When I mentioned this chapter to Gericke, he said, "I loved writing that scene. It just went on and on and poured out pretty much as I wrote it. Something about that sergeant was so noble it made the scene zing." I totally agree.

Torn Apart is a rollercoaster ride of a suspense thriller, and not for the faint of heart. There is a dark underlying humor in the book, which I always enjoy in the novels I read. And, of course, there is plenty of bloody mayhem. The characters are well-defined, the dialogue is dead-on realistic, and the action is nonstop. The intertwining of subplots is expertly orchestrated, and the action scenes are so well choreographed that you feel that you're right there in the middle of the violence, dodging bullets and body parts.

I'll have to find Gericke's two previous books in the series, Cut to the Bone and Blown Away, and keep an eye out for any new material in years to come.