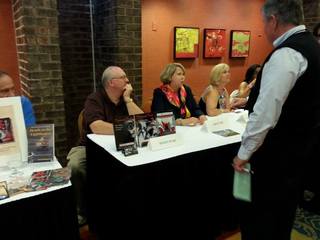 Weldon Burge, Executive Editor at Smart Rhino Publications, at a book signing at the C3 conference.

I've attended a number of writers conventions and conferences over the years, and have learned a great deal at most of them. Of course, the opportunities to network, to talk with other writers and publishers, abound at these events. But the most recent conference I attended--Creatures, Crimes, and Creativity (C3)--was a different animal.

I attended C3 last weekend (Sept. 13-15) at the Hunt Valley Inn near Baltimore, not sure what to expect, this being the first year of the event. I was pleasantly surprised. The organizers (chiefly the owners and friends of Intrigue Publishing) did an excellent job pulling together all the elements of the conference, despite a couple of last-minute changes in key speakers. I knew I was in for something special when I saw the paperback anthology of stories by many panelists and attendees that was included with the other conference materials. When have you ever seen that?

The three days were filled with panel discussions, all of which invited participation from those in the audience. No dry lectures here! Every panel involved a conversation among the experts sitting on each panel, the moderator, and the folks sitting in the seats before them. This was a refreshing change from many of the conferences I've attended in the past.

thanks for such a great blog. Being a moderator on your panel was so much fun and I cant wait to do it again.

Wendell, thank you so much for your kind words but really, it was the folks in attendance that really made the C3 Conference! Can't wait to do it again next year and I hope you bring some Smart Rhino authors with you!

And if you're going to thank someone, make sure you type their name right!! Sorry, Weldon. :(

(Every writer needs an editor...)

I'm so happy to hear that you had a great time. :) Hopefully I'll be able to attend next year. :)