Indiana writer James Dorr’s The Tears of Isis was a 2014 Bram Stoker Award® nominee for Superior Achievement in a Fiction Collection. His other books include Strange Mistresses: Tales of Wonder and Romance, Darker Loves: Tales of Mystery and Regret, and his all-poetry Vamps (A Retrospective). Also be on the watch for Tombs: A Chronicle of Latter-Day Times of Earth, a novel-in-stories due for release from Elder Signs Press in spring 2017. Dorr, an Active Member of HWA and SFWA, has seen his work published in more than 500 publications, from "Alfred Hitchcock's Magazine" to "Xenophilia."

If you're familiar with Smart Rhino's anthologies (and we certainly hope you are!), you may remember his stories "The Wellmaster's Daughter" in Uncommon Assassins, and "Labyrinth" in Insidious Assassins. His story "Golden Age" will be published in Zippered Flesh 3, now in production.

James was happy to spend a few minutes to talk with us. Enjoy!

Your book The Tears of Isis was a Bram Stoker Award finalist in 2014 for the fiction collection category. Your stories have appeared in many anthologies, including Smart Rhino's Uncommon Assassins, Insidious Assassins, and the upcoming Zippered Flesh 3. Do you prefer the short form over writing novels? What's the allure for writing short stories?

Allan Poe wrote in his essay, “The Poetic Principle,” that “a poem deserves its title only inasmuch as it excites, by elevating the soul.” So, a true poem must necessarily have a certain brevity. “That degree of excitement which would entitle a poem to be so called at all, cannot be sustained throughout a composition of any great length. After the lapse of half an hour, at the very utmost, it flags--fails--a revulsion ensues--and then the poem is, in effect, and in fact, no longer such.” There are such things as epics, of course. But to Poe, despite the need for unity for a work as a whole, such a work in practice becomes a series of shorter poems, though perhaps not so much through the fault of the poet as that of the reader.

Nevertheless, I think I agree with what Poe is getting at-- Read More 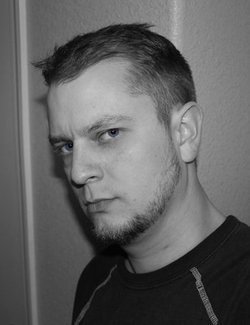 Michael Bailey is a multli-award-winning author, editor, and publisher of incredible speculative fiction. He recently won the Bram Stoker Award for Best Anthology for The Library of the Dead. His nonlinear horror novel, Palindrome Hannah, was a finalist for the Independent Publisher Awards. His follow-up novel, Phoenix Rose, was listed for the National Best Book Awards for horror fiction, was a finalist for the International Book Awards, and received the Kirkus Star, awarded to books of remarkable merit. Scales and Petals, his short story and poetry collection, won the International Book Award for short fiction, as well as the USA Book News “Best Books” Award. His short fiction and poetry can be found in anthologies and magazines around the world, including the US, UK, Australia, Sweden, and South Africa.

Michael has published a number of anthologies (including Pellucid Lunacy, Qualia Nous, The Library of the Dead, and the Chiral Mad series) and has just released Chiral Mad 3, published by his own imprint, Written Backwards, at Dark Regions Press. He is currently the Managing Science Fiction Editor at Dark Regions. Michael took some time off from his busy schedule to talk with us.

Chiral Mad 3 was just released, and you must be ecstatic. An introduction by Chuck Palahniuk, illustrations by Glenn Chadbourne, stories and poetry by incredible writers (Ramsey Campbell, Stephen King, Jack Ketchum, Mort Castle, Gary Braunbeck, Gene O’Neill, and 15 others). Wow! This is your most ambitious project to date. Can you share with us some of your process when pulling together such an impressive anthology?

I’m not even sure where to begin. I knew there would be a third Chiral Mad someday (I was hounded for it immediately upon release of the second volume). I knew if it were to exist, the book would have a specific story by King: “The Last Rung on the Ladder,” so I guess it all started with Steve. Apparently he digs my anthologies, or at least I hope he does, since he’s found his way into three of my books. “The Jaunt” appeared in Qualia Nous last year (a literary blend of science fiction and horror), and “I Am the Doorway” will appear later this year in You, Human, my first science fiction anthology with Dark Regions Press.

I designed the cover for Chiral Mad 3 and on a whim decided the entire book should be chiral in structure, with an odd amount of stories and an even amount of symmetrically-placed poetry. I reached out to a handful of writers I wanted in the book (for both fiction and poetry). Before I knew it, I had a dozen stories and a dozen poems; every single one of them spectacular. Chaos quickly took over.

I had so much fun  Read More