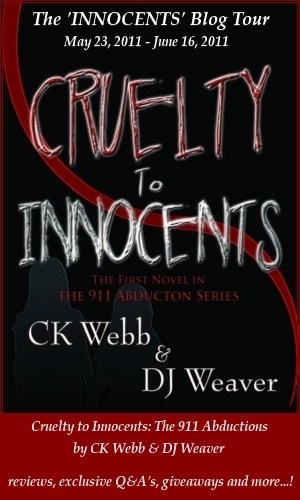 What if you were in your car, alone with your small child, and you came upon an emergency scene? Would you stop to help? What if, while you are trying to assist a victim of an accident or mugging, you leave your young child alone in the car, thinking he or she would be safe. What if, instead of help, the call to 911 brought a terrifying, sinister result? Who is the monster that, in the midst of the chaos and confusion of the scene, slips in and steals the innocent children leaving, behind no trace for authorities?

This is the premise of the new suspense novel, Cruelty to Innocents: The 911 Abductions, by CK Webb and DJ Weaver, a mother-daughter writing team. The book is the first in a trilogy. I managed to catch up with the two during their blog tour in promotion of the book, and they were happy to answer the following questions.


Weldon Burge (WB): What inspired you to write Cruelty to Innocents (aside from the obvious wealth and fame)?

CK Webb (CK): LOL!!! Isn't wealth & fame enough? Actually writing has always been a big part of who I am, but I lost sight of that fact for a great many years—took a few, big kicks in the pants to get me straightened out.

DJ Weaver (DJ): CK came to me, told me about this idea she had for a movie, and then gave me the spill. She asked if I wanted to help her write it as a book. Knowing that she is a one-finger pecker, I figured, if I didn't help, she would wear her index finder to a nub. So, I agreed.


WB: Talk about your writing process. Do you discuss a chapter at a time, and then assign one of you to write it? How does this work?

DJ: We sit down together and toss ideas around until we have a good outline.

CK: We always discuss a chapter before diving into it, where it is heading and exactly the outcome we would like to see. Then, I handwrite a few thousand words.

DJ: When she finishes a chapter, she dictates to me while I type. I add things along the way and 'flesh' out the story. We both review the draft until we have a chapter that suits us both.


WB: How do you handle the editing/proofreading chores?

CK: Editing is a bit of a different monster. We usually do a first edit; we alternate chapters and edit our chapters separately.

DJ: I normally take the even chapters, she takes the odd.

CK: Then, we come together and edit again as a team. We usually do this several times, rotating our chapters until we feel the editor is ready to see what we have—then it starts over again. There is a lot of proof reading involved, which is very time consuming, but it works.


WB: What was the greatest challenge you faced as collaborators?

CK: The greatest challenge has to be different points of view and a lot of times different directions for characters and plots. DJ is a romantic; I am definitely NOT, so it causes some issues at times.


WB: And the greatest benefit of your collaboration?

DJ: We know each other’s likes and dislikes as far as reading and storytelling goes. It's easy to know where she or I want to go with a story.

CK: The biggest benefit is, without question, two sets of eyes, two editors, two readers ... well, you get the picture.


WB: Looking back, is there anything you would have done differently in the process of bringing Cruelty to Innocents to fruition?

CK: I like to say that I would never change the past, because it is how I learn. However, if I had to change one thing, I would not have signed with the very first literary agency that showed interest in our work!

DJ: Looking back, we might not have signed with an agency, but taken the book straight to e-pub. After Cruelty was written, we really thought we wanted to go the traditional route. But, over the two years since, things have changed. I guess it took going through what we did to get to where we are.


WB: So, are you ready for the zombie apocalypse?

DJ: Absolutely not ready for the zombie apocalypse, but I am in the process of hoarding food and purchasing guns!

CK: I have been ready for the zombie apocalypse for years! The real question is, are the zombies ready for me?!?!


WB: What’s next on your writing agenda?

CK: We are editing Collecting Innocents, and then slated to write Avenging Innocents, the last book in the Innocents series, after that we have a few horrors and a young adult book that I am dying to tackle.

DJ: We also have several great story ideas in the works, but I personally am torn about which to write after the Innocents Series is complete.


WB: Suppose Hollywood came to you, handed you $100 million, and told you to remake any suspense movie of your choice. Which movie would it be, and what would you change?

CK: I was kind of hoping if Hollywood came to me with $100 million, it would be for Cruelty to Innocents and I could cast the whole film!

DJ: Do you remember a movie called Portrait of Jennie from 1948? It starred Jennifer Jones and Joseph Cotton. Something about it was very eerie. Of course, I'd have to change the actors, but the movie was wonderful as is. Also, I might consider doing a remake of an Alfred Hitchcock thriller like Vertigo or North by Northwest, but I don’t know what changes I could make to the master's work.

CK: I guess a great movie to remake would be Alfred Hitchcock's The Birds. I wouldn't want to change a thing (I mean who can touch Hitchcock?), but giving it a fresh look and a fresh set of actors, coupled with the special effects available today, and The Birds would draw in the crowds again and introduce a whole generation of moviegoers to real suspense as developed by one of the masters.


WB: Last question! In one sentence, what is the future of publishing?

DJ: I love my printed books, but I believe publishers will eventually have to change their SOP or go by the wayside.

CK: Whether electronic or print, publishing's future lies in the telling of great stories not in big names with astronomical advances!


Thanks, CK and DJ, for a great interview!