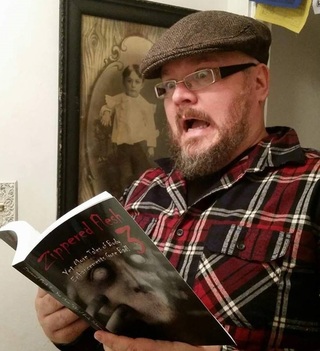 Shaun Meeks was born and raised in Toronto, and still lives there with his partner, Mina LaFleur. They run the business L'Atelier de LaFleur, which specializes in hand-finished couture corsetry and accoutrements. Shaun was formerly a semi-pro skateboarder. Now he enjoys sharing his nightmares in his writing—and scaring the hell out of his readers! His short stories have been published in many magazines and anthologies, including Haunted Path, Dark Eclipse, Zombies Gone Wild, A Feast of Frights, Insidious Assassins, Someone Wicked, Zippered Flesh 2, and Zippered Flesh 3. He is also the author of the books The Gate at Lake Drive, Down on the Farm, and Earthbound and Down.

Thanks, Shaun, for hanging out with us for a few minutes. To say you have a passion for horror is an understatement. What was the first horror novel that you found truly frightening?

I was in grade four, and I went to the corner store near my house to pick up some new comics. But when I saw this book cover—all silver, gray, and black with a faceless head on it—I had to pick it up. I already knew who Stephen King was, but I had never heard of The Shining before. The movie was something I hadn't even known about, but when I read what the book was about, I was sold and luckily I had enough money in my pocket to buy it.

I started to read it, tearing through the pages so fast. I think part of what scared me about the story was how I saw bits of my own father in Jack Torrance, a man fighting his demons and losing. I brought the book with me to school and was sent to the principal's office. They used words like "pornographic" and "disgusting trash," and threw my copy out. Luckily, the local library also had it and I took it out from there, but only read it at home. I had already been into monster movies and horror things before then, but this was the first horror novel I read that gave me nightmares.

Your novel, The Gate at Lake Drive, is a great monster story. (And the cover is super, too!) What's your recipe for a memorable monster?

Really depends on what you're going for. Making one scary—the stuff of nightmares—is just fun. To do that, I usually think of what frightens people. Deep-sea life, spiders, demons, the dark—these are things I'll splice into a monster so that, on a deep level, the elements strike a chord of fear within the reader. I love the idea of monsters with slimy tentacles, coarse hairs, a multitude of eyes, and a nest of sharp, deformed teeth. The trick is making the reader imagine what it'd feel like to be face-to-face with the monster. The idea of feeling the repulsive skin touching your own, the overwhelming odor of rot that lingers on the thing's flesh. That's what I want readers to be thinking as they read.

But what about the monsters that truly hate or can't change what they are, the ones that you pity? I enjoy playing with that theme—the monster that is hunted and feared yet proves to be the character with which the readers relate. The humans who shun or hunt the creature prove to be the real monsters. Having a reader relate to the monster isn't always easy, but it's great when it works!

So, which is the better monster, Alien or Carpenter's The Thing?