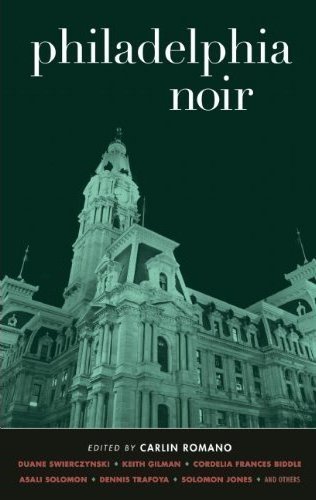 A few years ago, at a writers conference at Wilmington College, I ran into Ed Dee, author of the great police procedurals 14 Peck Slip, Bronx Angel, Little Boy Blue, Nightbird, and The Con Man's Daughter. Ed mentioned that his short story, "Ernie K.'s Gelding," had just been published in the Akashic Books anthology, Bronx Noir. I went straight out and bought the book, loved Ed's story as well as the other stories, and then ordered three other Akashic anthologies. I haven't been disappointed yet!

If you’re not familiar with the award-winning noir anthology series published by Akashic, you’re missing something truly grand! Launched in 2004 with Brooklyn Noir, the series now has anthologies set in Los Angeles, Detroit, Chicago, Baltimore, D.C., Las Vegas, Phoenix, and many other U.S. locales, as well as cities and places around the globe, including Toronto, Paris, Mexico City, Havana, Dublin, Moscow, London, and many others. Each story is set in a distinct neighborhood or location within each respective city. It’s a spectacular publishing effort that is still expanding, with editions set in Cape Cod, Pittsburgh, and San Diego scheduled for publication this year.

The recently released anthology, Philadelphia Noir, is another fabulous addition to the series.  Read More

The Fear of Reading 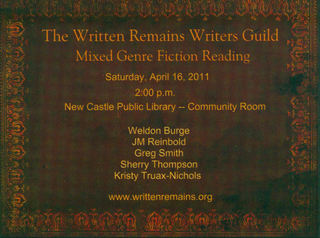 Ok, here's the thing. I've never read my own work in public before. You'd think, after freelancing for 30+ years (yes, I know I'm dating myself), I would have taken the opportunity, at least once, to read a short story or excerpt from my writing. To be honest, I don't recall ever even being invited to do so.

On April 16, at 2:00 in the afternoon, I will be reading with my fellow Written Remains Writers Guild members in the Community Room of the New Castle Public Library here in Delaware. This is a wonderful opportunity, a learning experience at the very least.

Can you hear my knees knocking?

I'm a bit anxious about the reading. Like most writers, who are typically more like hermits than spotlight-stealers, I loathe public speaking. And how ironic that the story I intend to read is a flash piece titled "Performance Anxiety." Must be something karmic going on here!

The story was originally written for Drabblecast, a weekly audio fiction podcast; the production of the story was posted on the Drabblecast Web site back in 2008. Norm Sherman's reading of "Performance Anxiety" was spot-on excellent. I hope I can do the story justice when I read it.

So, I've been practicing using a handheld digital recorder. The story is flash fiction, right around 500 words. No sweat, right? I've rewritten parts of the story because I tended to stumble over some phrasing—for example, I changed "luxurious auburn hair" to "magnificent red hair." My friends will tell you that I tend to mumble, my brain racing ahead of my tongue. This usually results in a nasty entanglement of words tumbling from my mouth. Think "The King's Speech" with no sense of regality. So, I'm excising any stumbling blocks in the content of the story. I'll do anything to make it easier to read.

Weldon, I wish you much luck at our reading. And this was a great post!

You'll be fine. See you there!

I wish you much luck!
You'll do fine. But I do know what you mean.
Writers don't enjoy the spotlight. I do admire you too!

This will be a wonderful opportunity for you. I think you are more than ready to read aloud. Just remember to have fun.

The reading went extremely well! I was nervous waiting for my turn, but the anxiety dissipated as I walked up to the podium. When I stood behind the microphone, I was ready to have fun and the nervousness was totally gone. My flash piece was geared for laughs, and I got them. When I looked up at audience at the end, I saw only smiling faces. Made my day!